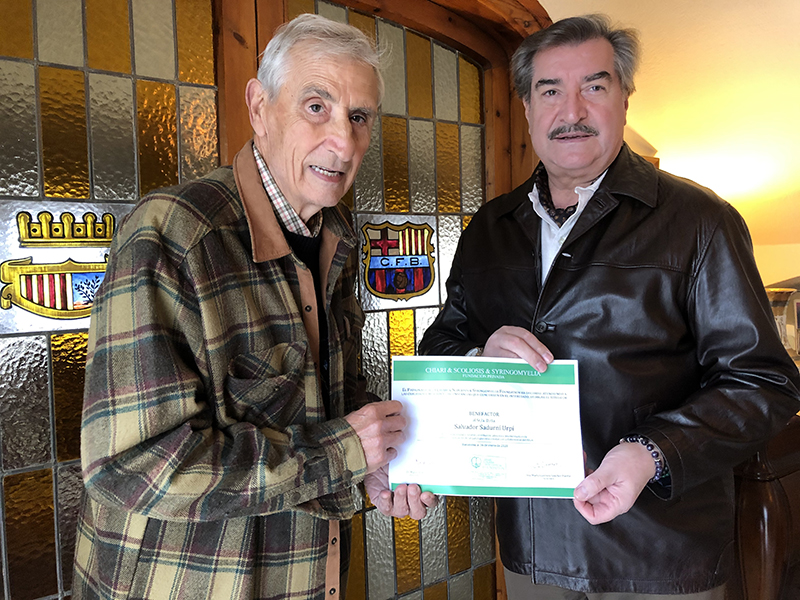 We are happy to announce to all our friends and collaborators that Mr. Salvador Sadurní Urpí, FC Barcelona goalkeeper in the 70s, has been named benefactor of the Chiari & Scoliosis & Syringomyelia Foundation.

As you can see in the pictures, Dr. Miguel B. Royo Salvador, President of the Board of Trustees of the foundation, awards him with the Diploma in recognition of his generosity and solidarity shown with his donation; as well as by his invaluable collaboration to achieve the contribution of Mr. Lionel Andrés Messi Cuccittini– better known as Leo Messi–. 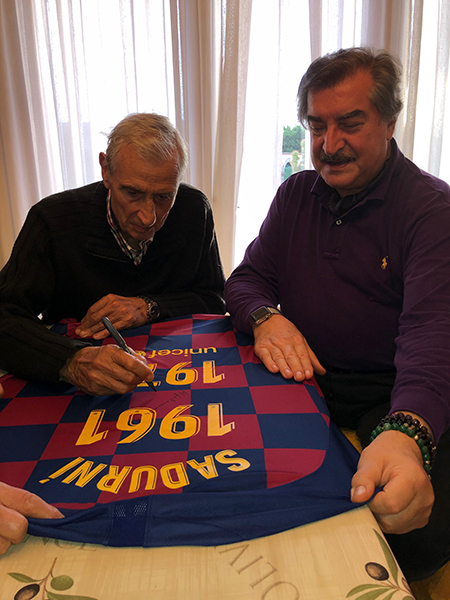 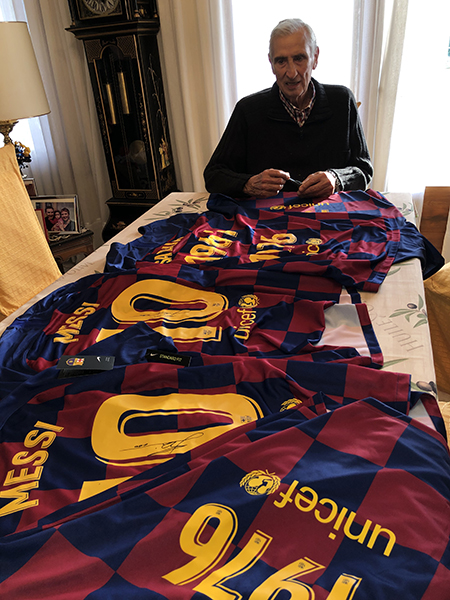 Salvador Sadurní Urpí, benefactor of our foundation, was born on 3 April 1941 in L’Arboç (Tarragona, Spain).

His story starts out in El Vendrell, when at the age of 15, he was so tall that looked older than his age. He caught the attention of the Barça Junior team, and this is were he started his career that would last 16 years (of 1960 to 1976) as the goalkeeper of FC Barcelona’s first team. Ramallets, his idol, gave him the chance and Kubala promoted his career. During 2 seasons, between ‘73 and ‘75, Sadurní was the best goalkeeper of the Spanish football league and conquered the Zamora trophy.

Later on, he wanted to give his life a chance and became a bank employee at the Caixa del Penedès. He retired at 63 years of age and started a new life in the countryside on the following day, which he still enjoys at present.

We could say that Salvador Sadurní has lived three lives: Barça goalkeeper for 16 years, employee in the central office of the Caixa del Penedès during 30 years, and now, a proud farmer of his orchard and of the grapes of his vineyards. He was always faithful to his roots and always kept his living in his village, L’Arboç, even when he played for Barça.

Lionel Andrés Messi was born in Rosario (Argentina) on June 24, 1987, and plays as a forward or far right. He comes from a humble background. His father, Jorge Horacio Messi, was a factory worker and his mother, Celia María Cuccittini, worked in various fields.

At the age of 11, he received bad news. He was diagnosed with growth hormone deficiency. It was an obstacle for him to access important football clubs, despite his great talent. However, this did not impede him to continue with his aspirations to be a professional footballer.

Messi began his sports career in 1995 at CA Newell’s Old Boys, where he played until the end of 2000 season. Then, he left Rosario and moved to Europe at age 13 along with his family.

At Football Club Barcelona (FCB) he signed a football life insurance on a paper napkin through Josep Maria Minguella and Carles Rexach that incorporated him into the children’s team. The club agreed to take care of the expenses so that Leo could follow the treatment he needed.

He has won the Golden Ball 6 times and is the top scorer in the history of FCB.

Apart from its football skills, Lionel Messi has been recognized for his willingness to help people who need it: in 2007 he created the Leo Messi Foundation, whose function is to help children and adolescents with educational and health problems. Many parks, sports centers, and social areas have been built by this foundation. The player also collaborates in charitable acts by participating in exhibition games and conducting fundraising campaigns. In 2010 UNICEF appointed him as its goodwill ambassador.

Finally, we express our gratitude for his donation to our Chiari & Scoliosis & Syringomyelia Foundation, 2 t-shirts signed by himself, thanks to the mediation of Mr. Salvador Sadurní (former FCB goalkeeper and the Spanish national team).