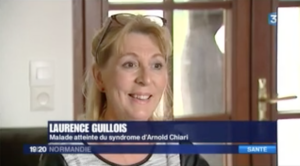 Link of the news: https://france3-regions.francetvinfo.fr/haute-normandie/eure/guerie-en-espagne-laurence-se-bat-pour-etre-remboursee-par-la-securite-sociale-929483.html

The patients Laurence Guillois, Françoise Simon and Emmanuelle Tarquini are fighting to be reimbursed by the French social security and to get the surgical procedure recognized, which as per their comments, saved t heir lives.

The patient Laurence Guillois said that she started to have several symptoms that limited her physical activity and consequently had to quit her job as a company director. Very desperate, and after being rated as inoperable by the neurosurgery department in France, she began to seek new horizons to solve her problem. One day she found online information about the surgery of the sectioning of the filum terminale, a surgical treatment that is exclusively applied at the Institut Chiari & Siringomielia & Escoliosis de Barcelona in the case of her diagnosis.

Laurence did not hesitate and decided to go to Barcelona for the surgery and as a result she noted significant improvements immediately after the surgery.

Currently, she is trying to get her expenses of the surgical process reimbursed by the French social security. However, to achieve this, the high level health authorities in France need to recognize the process of diagnosis and treatment according to the protocol of the Filum System®, which so far has not been achieved despite being questioned by thirteen members of the Assemblée Nationale at different occasions for five years.

Dr Parker, according to his publications, has a mortality rate of 0,6% in somewhat more than 300 patients. Whereas, the Filum System® with the sectioning of the filum terminale does not have any mortality in more than 1000 patients. Dr Parker lacks information and the scientific knowledge applied in the Filum System®. Neither has he bothered to learn it as it is taught for free nowadays and since years at the Filum Academy Barcelona®.