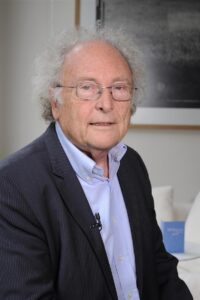 We express our deepest condolences on the demise of the great science communicator Eduard Punset. He was born in Barcelona in 1936 and was the author of several books on science, economic analysis and social reflection. He graduated in law and with studies in economics, he also practised politics and teaching.

He defended arguments of scientific relevance with determination, curiosity and optimism, making it possible to combine knowledge and entertainment. He ensured that the knowledge could be transmitted in a comprehensible manner without any barriers or cultural limits.

As a specialist in topics like the impact of new technologies, he directed and presented the television program for scientific communication “Redes” on Television Española – TVE (Public Spanish TV broadcasting) for 18 years. He led a team that managed to inspire passion for science by bringing it closer to popular culture. In this program, he dealt with the topics such as biological evolution, human and animal nature or the destiny of Homo Sapiens, the Earth and the Cosmos.

During emission years of his program “Redes”, he interviewed prestigious scientists such as Dr Miguel B. Royo-Salvador, neurosurgeon; director of Institut Chiari & Siringomielia & Escoliosis de Barcelona and president of Chiari & Syringomyelia & Scoliosis Foundation. They conversed in an episode that was dedicated to the possibility of the brain transplant in humans.

To conclude, from Chiari & Scoliosis & Syringomyelia Foundation we deeply thank you for making the complex simple, with your journalism focused on communicating the significant and hence making science accessible for all.